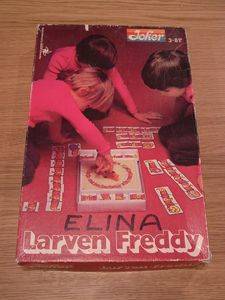 Children's game, probably from the early 1970's. Players compete to build the longest caterpillar from tiles depicting heads, body segments and tails. To do this they take turns spinning a plastic pointer. When it stops, it will point to either a head tile, a body tile or a tail tile. The player picks up a tile of the indicated kind and adds it to the caterpillar he is currently building in front of him. A complete caterpillar has a head, at least one body tile, and a tail. A player must complete his current caterpillar before beginning a new one. If his caterpillar needs a tail, and the pointer stops at a head or a body tile, he may not pick up a tile but must try again on his next turn. There is nothing players can do the affect the outcome. Longest caterpillar at the end of the game wins. There are 40 body tiles, 8 head tiles and 8 tail tiles. All heads are different but they are all happy faces, some with hats and so on. It doesn't really matter which heads you choose, but this may still seem important to young players. It is also the only decision players make. Scandinavian edition Larven Freddy ("Freddy the Caterpillar") was published by Brio under the Joker label, but the copyright belongs to John Waddington Ltd. I haven´t found a similar game actually published by Waddington, so any information on this is welcome.