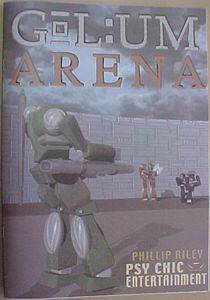 From back of rule book: In a future save from the destruction of the past, war no longer exists, but formal combat remains. Join the ranks of the Warrior Elite, piloting huge Meca called "Golems" within a dedicated battle facility known as The Arena. Play is fast and deadly, with speed and defense just as important as raw firepower. Number of players is limited only by availability of components. Comments: A similar concept to Battletech. The game contains one rule book, one map (plain white with a hex grid), one sheet of counters (use your scissors to cut them out) and a deck of 36 cards (very thin and flimsy).