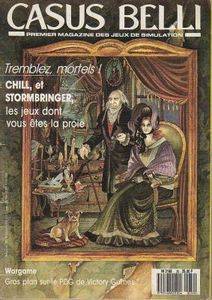 Extremely simple simulation of the Seven Years War battle between the Prussians and Austrians at the Saxon village of Hochkirch. Two pages of rules in French include movement, combat, artillery and morale. Fought on a small but handsome colour map (40x30cm) with 92 counters (incl. 16 markers) which need to be mounted. Published by the French magazine Casus Belli (Issue 39 - Aug 1987).