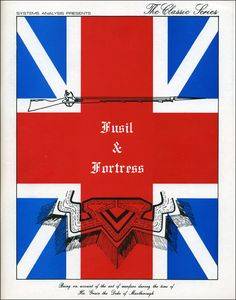 "Being an Account of the Art of War During the Time of His Grace The Duke of Marlborough" Introduction Fusil and Fortress is a Systems Analysis Classic Series game which offers the player an incredible amount of detail while providing a game which is easy to learn, interesting to read, and challenging to play. Fusil and Fortress is designed as a two-part game. Sections one through nine contain the rules required to play the tactical game, with Section three devoted to history, tactics, and organization. Sections ten through fourteen contain the rules for siege warfare, supply, engineering, and administration. Fusil and Fortress is not designed as a multi-level game in which you must learn more and more complicated rules. Once you have read the game, you can play it. We do this for two reasons. Our games are clearly written and our design staff feels that the wargamer has a lot more common sense than many games give him credit for. As an added bonus, Fusil and Fortress is designed to be played with or without an umpire. We feel that Fusil and Fortress will be one of the most engaging games you have ever played. The reason for this is that all our designers are wargamers and understand problems with rules. Designer's Notes Because Fusil and Fortress is the first commercial wargame to effectively address warfare in the early 18th Century, the design staff felt that it was appropriate to discuss certain elements of game construction because of the radical departure from traditional game mechanics. In most games, actual formations are sacrificed in order to cram the appropriate number of figures in the proper space. Thus, a one-deep line of figures may represent a two- or three-deep line of actual soldiers. While this method of game design may be perfectly acceptable for other eras, it would not be for the early 18th Century. Linear Infantry formations and numbers of ranks were of paramount importance and it would be impossible to use one rank of figures to represent more than one rank. Therefore, we have sacrificed a little space for accuracy and detail unknown in any other game. The upshot is that a unit will operate in the correct linear space in the proper number of ranks, but it will occupy an area slightly deeper than it actually would have. The rules have been formulated to mitigate this depth. This unique design enables Fusil and Fortress to demonstrate the differences in the Dutch, Swedish, and French methods of musketry in a way you can actually see so that you can make them work the way they actually did. The rules for artillery have also been designed to accurately represent the "fall of shot" and the occasional ricochet. The windage gauge is normally placed near the target which results in a smaller angular deviation of shot as the range increases. The inaccuracy of this method is obvious, and we have corrected it. Because of the design of the artillery firing system in Fusil and Fortress, no artificial additions for enfilade fire or other tactical advantages are needed. The siege rules are a wargaming first and we do not believe that anything like them can be found anywhere. We have done everything possible to create in miniature the Vauban method of siegecraft and fortification. In conjunction with these unique combat and siege rules, we have also provided every last detail for engineering, supply, and administration, so that you can even "pay" your troops if you want to. You do not have to use all the information in Fusil and Fortress to have an exciting early 18th Century wargame, but when you do want information, it is there. We feel that keeping these design differences in mind will help you understand the game better and enjoy it more. Good gaming.