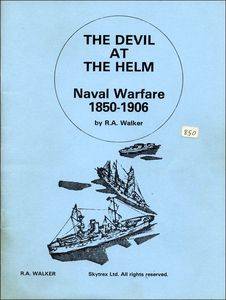 The Devil at the Helm is a set of miniatures rules for naval warfare in the ironclad and pre-dreadnought eras. From the introduction: "The years between 1850 and 1906 saw immense changes in naval warfare. "From lines of stately three-deckers, the great powers' fleets changed to a multitude of armoured warships, each unit of which represented a pinnacle of design and engineering skill. Forces became a hotch-potch of individual ships, differing widely in their abilities and deficiencies, as the older ships mixed with the new. Specialized missions and hostile environments sometimes necessitated vessels of novel and awkward design, such as the river craft of the American Civil War. With these new ships came new and terrifying weapons, destroying forever the world of Nelson and Hornblower. "However, two factors bound this era of change into a single period: the predominance of steam propulsion and the control of gunnery by individual gunners. "It is upon these two factors that this set of rules has been based, enabling players to experience the changes "first hand" as a continuous process rather than examining each conflict in the period as an event unrelated to any other, and to appreciate as a whole the era of naval warfare before the Dreadnought." These rules offer some interesting mechanics to take into account the vast changes in naval warfare that occurred during the period they cover. Rules exist for maneuvering ships under sail, under steam power, and under a combination of both sail and steam. Gunnery includes muzzle-loading smooth bore cannon, muzzle-loading rifled cannon, early breech-loading cannon, and modern naval ordnance. The gunnery also includes rules to cover the different effects of the rounds that could be fired, such as solid round shot, solid armor-piercing (AP) shot, later AP shell, and common shell. Ships' armor values are calculated using tables in the rules that cover such things as the kind of metal (solid iron, laminated iron, mild steel, Harveyized steel, Krupp steel, etc.) and, for earlier ironclads, the type and thickness of the wood backing the iron armor. For an aficionado of the era, the rules can be very interesting because of the details of ship design and armament that are addressed. However, there is something about the wide scope of the rules that creates problems. For example, to determine where a shot hits, players roll on a table that lists the various parts of a ship. But the parts listed don't apply to all ships within the period. Things like "secondary turrets" don't exist on an ironclad ram. Inapplicable hits are simply assigned to one of two areas, but this tends to skew the hit allocation. There are very few ready-to-go ship stats included in the rules. Players are expected to create ships stats to use in the game based on the guidelines in the rules for designing these using data from external sources, such as "Jane's Fighting Ships," "Conway's All the World's Fighting Ships," and others. Players will also need to supply the templates used to determine the turning radii of the model ships. The ones included in the rules are hand drawn and not really suitable for play. One the whole, The Devil at the Helm has a lot of good ideas and is a strong basis for a good set of naval wargame rules for this period. But they leave a lot of rough edges for the players to smooth.