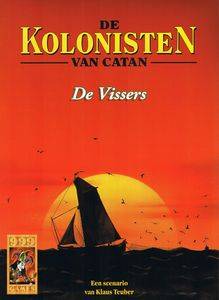 想玩 拥有
The Settlers of Catan: The Fishermen of Catan

An expansion/scenario for The Settlers of Catan. Originally, It is available only in the 5/2005 issue of Spielbox (this is the Essen Spiel edition, as the magazine is bimonthly). In 2006, the Dutch company 999 Games gave it away as an extra to those people who bought all scenarios in 999 Games' Six Scenarios series. Also given as an insert in Games Quarterly magazine, Spring 2007, Issue 12. This edition is published by Mayfair Games, Inc. and is the only one printed fully in English. Lastest publishing was in 2007 as inclusion in Catan: Traders and Barbarians (with sightly expanded rules in comparison to Spiel Box edition). The expansion is about fishermen. Some of the sea tiles of the base game are transformed into Fishing Grounds. These Fishing Grounds produce resources in a way similar to regular tiles. Instead of Resource Cards, Fishing Grounds provide Fish Tiles. Fish Tiles can be worth one, two or three fish. During his turn, a player can spend fish to get a special benefit: 2 fish: The player may move the robber back into the desert (he/she may not steal a card from another player who owns a settlement / town at the desert). 3 fish: The player may steal a raw material card from another player. 4 fish: The player may take any one raw material from the bank. 5 fish: The player may build a street immediately. 7 fish: The player receives a development card for free. In addition to fish, a player can also catch an old shoe. As long as a player has the old shoe in his possession, he needs one more point to win the game than usual. He can get rid of the old shoe by giving it to someone with the same number of points or more points than himself. Belongs to the Catan Series. Expands: Catan