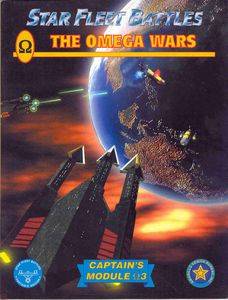 Part of the Star Fleet Battles Captain's Edition line. From the back of the cover: THE OMEGA WARS GO ON! War rages across the Omega Sector as Empires rise and nations fall. The Ymatrians rise to power, and then fall before the Drex. The Worb gather the remnants of Ymatrian technology and forge their own Empire. Refugees from the Alpha Sector arrive and establish the Federal Republic of Aurora. The deadly Souldra steal the life from everyone. The Singers stand on the verge of a new generation of weaponry that will make them a major power. Iridani quest ships have a myriad of missions. The Souldra use Dark Matter technology and Dimensional Phase Devices. The Iridani sent quest ships armed with Focused Energy Beams. The Ymatrians invent the Anti-Proton Beam and Anti-Proton Lance. The Worb mount their weapons in revolving turrets. The Federal Republic combines Federation, Klingon and Lyran technology. The Singers develop Tachyosonic Beams and Sonic Pulsers. Six scenarios, 62 new SSDs, and 216 Counters complete the package.