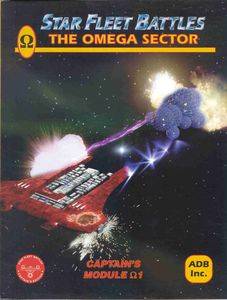 Part of the Star Fleet Battles Captain's Edition line. From the back of the cover: BEYOND THE VOID LIES... OMEGA! Beyond the galactic void, beyond the ISC, lies the Omega Sector, where mighty empires wage war, conquer vast territories, and are in their own turn destroyed. Unlike the relatively stable Alpha Sector known to SFB players, in the Omega Sector, there is no such thing as a fixed border, and the survival of races depends on the skill of a gunner, the ingenuity of an engineer, and the valor of a starship captain. It is a place of danger, death, and opportunity. Module Omega One is the first in a new series of adventures for Star Fleet Battles players. It includes 46 new ships, 11 new races, 24 new weapons, and many new systems. The mighty Mæsron Alliance seeks to dominate the area, but is opposed on all sides by the antimatter weapons of the Koligahr, the implosion bolts of the Trobrin Empire, the particle beams of the Vari Combine, the fireballs of the Loriyill, the bioelectric bolts of the Alunda, the energy howitzers of the Chlorophon, the kinetic waves of the Sigvirions, and the hypercannons of the robotic Drex Unity. Five scenarios only hint at the savage wars, titanic battles, and devastating conquests that mark the dangerously unstable Omega Sector. Enter at your own risk!