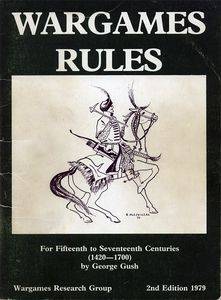 War Games Rules Sixteenth and early Seventeenth Century (1490-1660) are designed for recreating the battles of the Renaissance with 25mm miniatures. They use a figure scale of 1 figure equals 20 men and a ground scale of 1" equals 20 paces. Units are made up of five or more figures. Units are rated by such things as how they are armed, what kind or armor protection they have, how they are trained, and what level of morale they have. Shooting and hand to hand combat are done by comparing the weapon of the attacker with the armor of the defender, and then adding tactical factors to get a total factor, which is then cross-referenced with the number of figures in the unit that is shooting or attacking. The result is an actual number of casualties in men, which players have to divide by 20 to see how many figures are removed from the unit. Casualties that are less than 20 are noted and added to further casualties later on. This way of recording casualties, which was unique to the WRG games of the 70s, is a nice way of getting around an all-or-nothing casualty removal system. Even if casualties are few in any single combat event, there is still a cumulative effect that can cause figure removal later on. The morale of units may need to be checked with a Reaction Test for several reasons throughout the game. There are many variables that can affect the Reaction Test. Each variable adds to or subtracts from a roll of three average dice (2-3-3-4-4-5). The result is cross-referenced with the morale grade of the unit to determine the outcome. As a result of a Reaction Test, a unit may initiate an uncontrolled advance towards the nearest enemy, break and run away, or do something in between (the best result is always "carry on"). Units are given orders at the start of a game. Units must move and attack according to their orders until they lose their orders through a failed Reaction Test or until the orders are changed. Orders are the only command/control mechanism in the game. Players always have one CinC figure and may have one or more sub-generals. The CinC and sub-generals mostly aid in combat and Reaction Tests. The rules are complex and require players to use good tactical sense, which includes supporting units with other units (this helps in Reaction Tests) and knowing when and where to attack an opponent's units to get the best possible result. They are much more subtle than the Warhammer games produced by Games Workshop. They aren't designed for a quick "bash 'em up." They take time to learn, but they reward players who use sound tactics rather than players who are lucky with dice. The first edition of the rules covers warfare from about the beginning of the Italian Wars to the end of the English Civil Wars. The second edition adds things like handguns (primitive firearms) and plug bayonets that allow for wargaming battles from the latter part of the Hundred Years War, which saw the introduction of firearms, to the Nine Years War in the Low Countries, which was the end of the Pike and Shot era. The second edition also adds siege rules. Note: The second edition rules are called Wargames Rules for Fifteenth to Seventeenth Centuries (1420-1700). These wargame rules are based on an earlier set of rules by Dave Millward called Musketeer. They are also heavily based on Wargames Research Group's (WRG) 4th and 5th edition Ancients rules, which pioneered the basic game mechanics. As with other WRG rules, several Army Lists were separately published that provide guidelines for players to create historical armies.