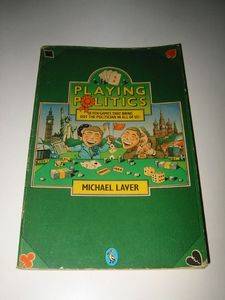 Playing Politics Seven games that bring out the politician in all of us. From the back cover: "This is a book of games and a book about politics. It is for anyone interested in politics, or who likes playing games - or who thinks the two are synonymous anyway. It is intended also as a useful adjunct for both teachers and students of politics, adding a practical, constructive but enjoyable dimension to their studies. It is about getting your own way, seizing power, making money, reneging on your promises. Players can be politicians, form parties, fight elections, overthrow governments and make all kinds of deals. From 'Primitive Politics' to 'Rolling Logs' and from 'Elections' to 'Agenda', each game is an attempt to capture the cut and thrust of political double-dealing." The author hopes that the games in this book will be fun to play and can be enjoyed by people who don't care about politics. However, the games are intended to show some aspect of the political process. Ten fundamental laws of nature that apply to all the games are set out in the first chapter of the book. Each subsequent chapter gives the rules of a new game and includes a discussion on strategy and how the game relates to reality. The games in this book are: 1) Primitive Politics (number of players 2 to 2,000,000,000) 2) Entrepreneurs 3) Elections 4) Coalitions 5) Coelections 6) Rolling Logs 7) Agenda The games can be played with a minimum of equipment - pencils, paper, money, playing cards. The book was originally published be Pelican in 1979. A revised edition was published by OUP in 1997.