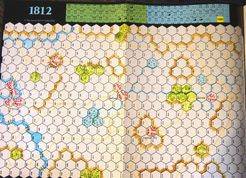 Simple variation of Napoleon's Last Battles system, with movement, combat and command in three pages of French rules, simulating the French crossing of the Berezina during Napoleon's retreat from Moscow (although no dates are given and there is no chrome to indicate the extreme climatic conditions). The scale is 400m per hex, one division per counter and 30 minutes per Game Turn. The battle is fought on a small, 35x40cm map, with 74 counters which require mounting. Designed to be played for the French 3rd wargame championship. It was included in the French magazine Casus Belli (Issue 30 - Jan 1986).