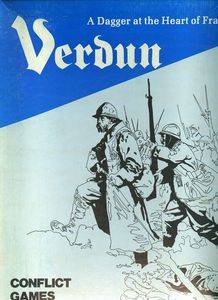 想玩 拥有
Verdun: A Dagger at the Heart of France

The 1978 release of Verdun, though based on the 1972 release from Conflict Games (designed by John Hill), is a completely new game with a new designer (Marc W. Miller). Verdun is a simulation of the 1916 German offensive that was supposed to "bleed the French white" in a single great battle of attrition, but instead turned into a bloody debacle of 10 months of slaughter. The mechanics of the game are mostly conventional for hex and counter wargames. Movement, stacking, and Zones of Control are typical of most other games. Combat consists of artillery barrage and infantry assault. Artillery can play a big part in the game, as it did historically in the battle. Players are limited in using their artillery by the ammunition factors they must keep track of on the Ammunition Availability Chart. Artillery expends ammunition factors when it fires, which may cause shortages. So, despite a large number of artillery units on both sides, players must use their guns judiciously. Assault is done after movement and after artillery bombardment. Attackers must designate their assaults during the movement phase before artillery fire. As a result of artillery fire, both an attacker and defender can be severely affected. Attackers must carry out their assaults regardless of losses from artillery, which can be disastrous. Supply rules are typical of many wargames. The rules provide means of destroying the opposing players artillery ammunition stocks and for interdicting rail lines and roads that serve as supply lines. The game adds some chrome with German pioneers (who aid in assaults), balloons spotting for artillery, road interdiction (which affects French supply), and gas attacks. There are also rules for the Germans reducing the fortresses that surround Verdun. While control of the city of Verdun is a primary victory condition for the game, the real key to victory is the amount of attrition each side does to the other.