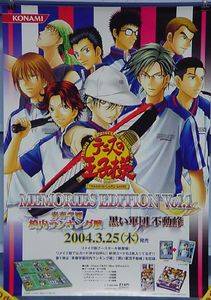 In the Prince of Tennis Trading Card Game you can play either a singles game or a doubles game. In addition, you don't have to play with the characters teams shown in the anime/manga series so you can mix up players to your liking. Object of the Game: You play with a deck composed of the cards you like (players, techniques, etc.). The card game is kinda like player real tennis. You use different strokes and moves to win the game. The player that score 4 points first wins the game (in real tennis it's counted 15,30,40,game). Winning the point is determine by the cards you play like using a power serve or smash ace.