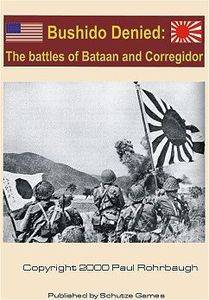 想玩 拥有
Bushido Denied: The Battles of Bataan and Corregidor

Bushido Denied is a wargame of the WWII campaign fought for the control of the Philippine Islands from January to May, 1942. The Japanese player is attempting to wrest control of the Bataan Peninsula and the Corregidor Island fortress from the American player as quickly and efficiently as possible. The Japanese 14th Army high command thought the entire Philippine campaign would last 4-6 weeks. Instead the campaign lasted nearly 6 months. Although these battles resulted in the only time an entire American Army, with over 76,000 men surrendered, the Japanese victory was a phyric one. General Matsuharu Homma never again held a field command. American and Filipino valor denied the Japanese the quick and decisive victory they planned. COMPONENTS: 2 different 11x17 inch maps represent the battlefields of the Bataan peninsula and Corregidor island 2 sheets totaling 280 double sided counters (one for Bataan and the other for Corregidor) show the forces controlled by each player and markers. One rulebook 3 Charts and table sheets