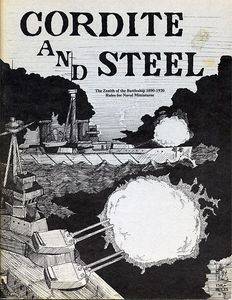 "The Zenith of the Battleship 1890-1920" Cordite and Steel is very much a simulation. Even though the mechanics are pretty straightforward (there are only 14 pages of actual rules), there is a great amount of adjudication needed for every shot taken. Players use range estimation and plot their shots by target, distance, number of shots, and spread. Factors such as the hieght of the firing ship's gun platform from sea level and a target factor based on the target ship's size are cross-referenced with the range to determine the "Danger Space" that extends beyond the ship model. All shots that are estimated to fall within the Danger Space are considered hits. The location of hits is determined from the Hit Probability Table and Armor chart that is unique to every ship. After this, penetration, damage, and critical hits are determined. The whole process for a single shot can be lengthy. Games that involve several model ships can take a very long time to adjudicate all the shots in any one game turn. The rules recommend that judges be used in the game in order to adjudicate the shots and record damage that only the player commanding the ship can see. Because of the time involved in this, the rules also recommend that an area be set aside for the players commanding the ships to play other games (like Monopoly) while waiting for the results of the firing to be determined. The area needed for play can be quite large. Gun ranges at 1:2400 scale can go up to 30 feet. Something like a gymnasium floor is the best place to play if you plan on a large fleet action like Dogger Bank or Jutland. For small actions, like the SMS Emden vs. the HMAS Sydney, these rules can be very good becasue the detail makes the individual action more exciting. However, the rules don't work for actions that are larger than Coronel or The Falklands. Despite its claim to cover the period from 1890 to 1920, Cordite and Steel is solely dedicated to naval combat in World War One. The only ship cards and Danger Space Tables supplied are for German and British WWI ships and guns. It would be very difficult to expand the game to other eras because of the intense amount of research needed to create ship cards and gun tables for other navies and wars.