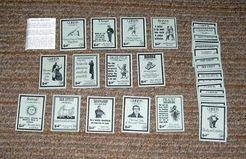 From the publisher (edited): Snake Oil - The medicine show card game! Step right up, ladies &amp; gents! Make fantastic medical claims for your bottled elixir. Slander your opponents and steal their secrets! Avoid angry mobs and law enforcement while weaseling the highest price possible for your Snake-Oil! 3-4 players is ideal, but can be played by 2-8. From the rules: The Setting: In the latter part of the 19th Century and well into the 20th, an industry boomed across the American Midwest. That industry was the Medicine Show, where any entrepreneur with a questionable recipe and plenty of business savvy could pull his wagon up to the center of town and hawk his medicinal wares for a few cents per bottle. You and your opponents are these peddlers of “Snake-Oil”. The Object: In Snake-Oil, the object is to achieve the highest per bottle price for your elixir. To do this, you may have to hire thugs, slander your opponents and plant ringers in the crowd. But it’s all in good fun and, hey, you always have the next town for your opponents to get revenge. Game Length: A game of Snake-Oil can last is little as 5 minutes or as long as an hour, depending on how many towns you and your opponents decide to hit. Each hand of Snake-Oil constitutes a town. The game includes a score sheet with room for the name of your product and a running tally for three towns. When you’ve played the number of hands you’ve agreed upon, add up the totals for each town and the winner is the player with the highest total value. Setup: Each player is dealt 7 cards face down (if there are more than 4 players, deal 5 cards each). This constitutes his hand at the start of the game. The remaining cards are placed in the middle of the table, and the discard pile will go next to it. The player to the dealer’s left goes first. Play: A player must first play a Cure if he has one. This goes directly in front of him in his playing area. He may then play any other card (except for another Cure). If he doesn’t have a Cure to play first, he may go directly to playing his second card. [Cards that are not Cures modify the value of the Cures or may cause Cures to be switched or discarded, etc.] He may opt not to play a second card. At the end of the player’s turn, he may draw as many cards from the deck as necessary to ensure he ends the turn with 7 cards in his hand. A player may opt to discard his entire hand and draw an equal amount of cards from the deck in lieu of playing any cards on his turn. This simply indicates his wagon has burned down and he’s buying new ingredients. Ending the Hand: The hand ends when the player who draws the last card from the deck finishes his turn, or when a hand-ending card is played successfully. There are 2 such cards: Rain! and Bust!. There is also a counter (or negating card) for each of them. A player may not end the hand by this method unless he has a value of at least 20¢ in front of him. Ending a hand by this method does not affect any cards already in play. Added Hype: There is a quick table included to randomly determine the name of your product (handy if you’re playing a four town Medicine Show). Snake-Oil is fun to play, but it’s a lot MORE fun when players start getting into the spirit of the game and hyping their products with zeal. Loosen up, have fun and enjoy your game of Snake-Oil!