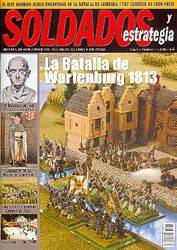 Simulates the battle on 25 April 1707 between Franco-Spanish troops under the Duke of Berwick and an Anglo-Dutch-Portuguese force in the War of the Spanish Succession (1700-14). Includes 200 counters which need mounting, a 58x42cm map and a Player Aid Chart. There are 8 pages of low-complexity rules, simulating basic chains of command, facing, fire and shock combat.