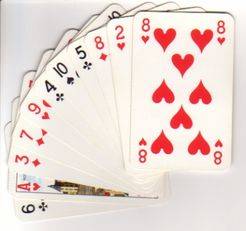 A simultaneous, real time, high speed card game for two to four players. Object: To build kitty piles consisting of adjacent pairs of cards that add to 10. There are other card sequences that also score points. You Need: A Poker deck. You start play with two empty kitty piles in front of you. You may take a card from the deck and put it in one of your your kitty piles. You may only take one card at a time. The object of the game is to build kitty piles that have specific cards and card sequences in them. It's important to note that you can not rearrange the cards in your kitty pile during play or at the end of the game. That's why you need to pay attention the the cards you grab while you're playing. You're trying to build kitty piles with the following features: * Card pairs adjacent to each other that add to ten. A pair that adds to 10 is called a Tomcat. (worth three points) * Tens. A ten is called a Yowler. (worth one point) * One or more face cards of the same type sandwiched between two other cards of the same type. Each face card in a sequence like this is called a Jellical Cat. (worth two points) * An unbroken chain of black cards that adds to thirteen. This is called a Black Cat. (worth six points) The game ends when the deck runs out of cards or (if the game stalls) when someone yells, 'Black cat, black cat, crossin' my path. Don't look back or you'll get scratched!' The player with the highest point total wins.