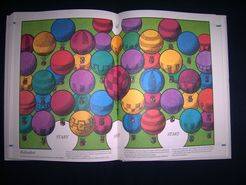 Used playing a dice with 6 colors as shown on the board. Each player has 3 counters, first player to get all counters to the finish have won the game. A players turn consist of rolling the dice and moving one of his counters to an adjacent balloon with the same color as rolled. Counters can only move forwards. If the player is not able to use the color rolled, he looses his turn, and the next player takes over. Found in a Danish book, originally published in Prague.