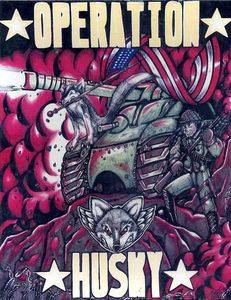 (from the box:) It's June 11, 1943 and the Allies are ashore on Sicily...the race to Messina has begun. As the Allied player, you have 12 divisions of Americans, Canadians and British. In all, 467,000 troops commanded by two of the Allies best: General George S. Patton and General Bernard L. Montgomery. Your objectives are to capture the Axis airfields and supply ports needed for the attack on the Italian boot and the destruction of the German and Italian forces in Sicily - you must not allow their evacuation to mainland Italy where they will live to fight another day. As the Axis player, you must methodically withdraw your forces to Messina for evacuation. Your command consists of the proud, but weary, Hermann Goering Panzer Division and the recently formed, but veteran, 15th Panzer Grenadier Division. You have 230,000 Italian soldiers to help in your defense, and the Fuhrer has promised reinforcements: the 29th Panzer Grenadier Division and the 1st Parachute Division. Now, it's June 11, 1943 and the Hermann Goering tanks are revving their engines for the counter-attack... Game Features Impulse Movement Allied Tactical Air Support Naval Shore Bombardment Air Interdiction Combined Arms Effects Anti-Tank Capability Fortifications Disorganized Units "What if" Scenarios Unit Scale = Battalions/Some Regiments Time Scale = 3 days/turn Complexity Level = Medium Game Components One 20" x 17" Four-Color Deluxe Mounted Gameboard 390 Oversize Die-cut Playing Pieces One Rulebook, One 6-sided Die and Several Charts and Tables