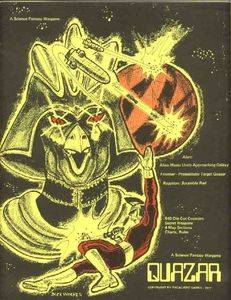 Quazar is a large strategic science fantasy wargame - very large, in fact, with 4 27"x21" black and white mapsheets (for a total play area of 4.5'x3.5') and 840 counters. One player takes the human side and defends the entire map against the other, who takes the invading X-Con (aliens, clones, and robots). The game appears to be a reasonably straightforward wargame of its type, complicated by a fairly wide variety of different unit types and the rules writer, who adopted what I have to assume was a deliberately obtuse style. For example, the combat phase (with its 8 sub-phases) is called "Violent Interaction &amp; Adaptive Reaction." The space combat results table is called the "Space Systematized Probabilistic Outcome." Etc. There is a fair amount of chrome, including secret weapons for each side (e.g., the humans can get a planetary defense screen, the aliens can get a space creature which moves around and eats human units). Contents: 840 counters 4 27"x21" mapsheets 2 order of appearance/secret weapon lists 2 guides to opposing forces (guides to your OWN are not included...) 2 "priority" sheets - one has some rules summaries, the other is just color) Rules folder Combat results table sheet Alien pod chart sheet