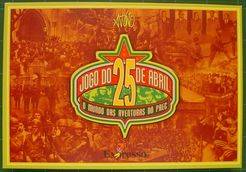 Commemorates the 30th anniversary of the "Carnation Revolution" of 1974 in Portugal, which overthrew the authoritarian dictatorship in power for more than 40 years. Mainly a race game along a linear path with a roll and move mechanic, there are also two special event decks and some special rules regarding some spaces.