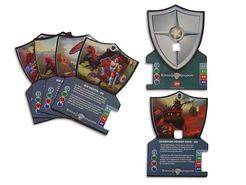 Knights' Kingdom Challenge Card Game is a card game based on the Knights' Kingdom LEGO series. In the card game, two players face off against each other in a joust with each card bearing one of four joust symbols (sword, helmet, shield, and Heart of the Magical Shield) and numerical values in each of four skills (speed, agility, strength and wisdom). Gameplay is similar to Top Trumps. Each player draws a card from their deck. Players compare their joust symbols (without revealing their skill values) in rock-paper-scissors style to determine the challenger and defender. Then the challenger chooses a skill, and players reveal their cards. Players compare the value of the cards in the chosen skill, and the player whose skill is highest wins the joust.