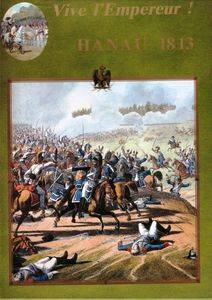 Simulates the abortive attempt on 30 October 1813 by the Austro-Bavarians under Wrede to prevent Napoleon's escape from Germany after the defeat at Leipzig, by blocking him near Frankfurt in Hessen. Uses an early, lower-complexity version of Didier Rouy's Vive l'Empereur! tactical system, which employs roster sheets and oblong counters to simulate formation changes between line and column. The battle is fought at regimental level on an attractive mounted mapboard (55x41cm) at a scale of 250m per hex, and in 30-minute game turns. Losses are recorded on roster sheets, and the rules, in French, are of medium complexity (12 pages of system rules and an 8-page scenario booklet). Game System: scale = 250 m/hex; time = 30 min/GT; strength = 600 men/SP (Regimental/Brigade Size)