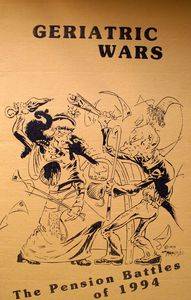 From the publisher: Dateline: 1990 New progress in medical science assures most people in the U.S. of living well into their second century. Dateline: 1994 The Social Security Data and Distribution System, (SSDDS), over-worked and long antiquated, finally collapses due to the destruction of the agency's central records center by fire. The single surviving data bank yields the addresses, but no names of a mere 125,000 social security recipients. The announcement of four to six months without any benefits sends thousands of protesting old folks to Washington. During the resulting riot, the director of the SSDDS is murdered by an enraged mob. In a last-ditch, desperate effort to save his skin, the new director authorizes the last 100,000 checks, labeled "occupant", to be mailed to the addresses listed in the sole surviving data bank. It was unfortunate that no official could have foreseen the wholesale slaughter of our elderly population for a few fortunate ones to cash a handful of checks. The "Pension Battles" had begun. This black page of American History was later known as the "GERIATRIC WARS"... Geriatric Wars is a game of tactical combat between two or more senior citizens. The object of the game is to secure the check by outdistancing or quickly eliminating your opponent. The game ends when the check is signed and mailed to the local bank, or there is only one player left.