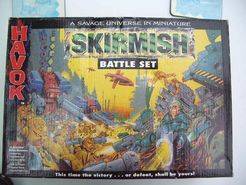 The Havok Skirmish Battle Set was a starter set for the short-run miniature war game Havok produced by Bluebird Toys in 1997. As well as this base set additional units &amp; even vehicles were also available in non-random booster packs. The Havok Miniatures Game was intended to fill a gap in the market by posing as a cheap alternative to Warhammer 40,000 (Third Edition). Unfortunately bad marketing and Bluebird Toys' financial shut-down cost the game dearly, and the line (along with the Bluebird Toys company) folded by Christmas 1997. Initially sold exclusively through Argos stores, all the unit boosters had a single item code meaning customers could not purchase the specific unit boosters they desired (Argos would pick from the boosters 'at random'). At the end of the line remaining Havok boosters were sold in bulk to toy suppliers where they proved surprisingly popular, but it was already too late for the game and many new fans didn't initially realise that the game was already discontinued. The game itself can be compared to a lighter, more simplistic version of Warhammer 40,000. Two or more players pick forces from three possible factions of the Havok sci-fi universe using a point system, and then battle it out across the tabletop. In the game's favour the models were made of from durable plastic, pre-painted and simply slotted into their bases which were decorated with simple stickers, meaning there was no modelling or painting required. The Havok Skirmish Battle Set included everything you needed to play, including a small fixed selection of miniatures, custom dice, range rulers and instructions, as well as four pieces of slot together scenery.