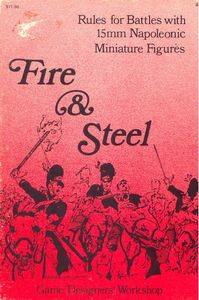 Fire and Steel is GDW's set of rules for 15 mm Napoleonic miniatures. The rules set provides a complete rules for conducting battles in Europe between 1808 and 1858. This rules system is ideal for the beginning miniatures wargamer. The rulebook is only 6"x9" in size with the text printed in single column to a page. They are concise an easy to understand while still modeling the effects of warfare accurately. The only thing the rules are a little thin on is command and control. The system assumes that all units activate orders automatically. However, this is a good thing for beginning wargamers (less to think about your first time out!). You can always add your own C&amp;C rules. GDW also included a 6"x9" organization book and charts in their boxed set. These detailed the organization, quality, capabilities, and how to mount the figures for each unit that fought in Europe during the Napoleonic era. Again, this makes the system easier for the beginner to learn as they don't have to do a lot of research. Fire and Steel regulates the size of bases and terrain on a pure ground scale. The board played on depicts terrain at a ground scale of 1" = 25 yds. The size of the minis bases are dependent on how much frontage the unit occupied, not abstracted like other minis games. Also see GDW's sister rules set called System 7 Napoleonics. For the most part, the two rules sets are identical. Really, the only differences are the ground scale (1"=40 yards in System 7) and use of paper counters to replace miniatures.