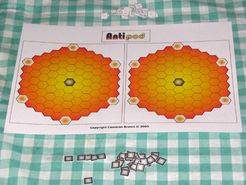 Antipod is a connection game with unequal goals played on the two halves of a sphere. Antipod is played on two equally sized hex boards, typically with six cells per side. The board is set up with a black piece in the center of each half, forming Black’s antipodal goals, and white pieces placed at the six corners of each board, forming White’s handicap pieces. Black wins by forming a chain of black pieces between the antipodal goals of each board half. White wins by preventing a Black win. This amounts to completing a cycle of white pieces around at least one of Black’s antipodal goals. Exactly one player must win.