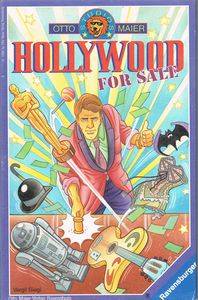 This is a card game of bluffing and auctioning various paraphernalia pertaining to Hollywood or actors/actresses. The game contains a stack of cards each depicting an item to be auctioned with the value of the item printed on the card. The cards either are very valuable (6-12) or are fakes, and are worth nothing (0) or very little (4-5). there is also an end of game card. The game begins with each person receiving 2 million dollars from the bank. The end of game card is shuffled into the bottom of the deck, and the deck is then placed face down on the table. The dealer looks at the top card and places the first bid on the item. Each player then in turn may either bid or pass. Once a person passes, they may not re-enter the bidding. The player with the highest bid pays the bank and receives the item - placing it face-up in front of him. He immediately is paid the value of the card (4-12) from the bank. If the card is a 0,4, or 5 and is sold for more than 300,000, the auctioneer receives $100,000 from the bank. The game then continues with the next player in clockwise order from the auctioneer looking at the next card and beginning the next auction round. The game ends when the "game end" card is drawn. The players then add up the values of their cards and the player whose items are the most valuable wins the game. Money has no value in the final scoring.