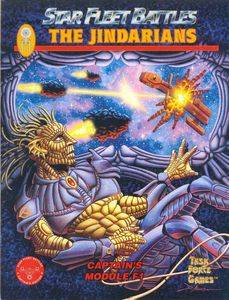 Part of the Star Fleet Battles Captain's Edition line. This module adds rules, ships, and scenarios for the Jindarians. Publisher Blurb: The Jindarians have been in space, flying huge ships built from hollow asteroids, for 100,000 years. They care little about borders, governments, and wars and just travel from system to system, mining asteroid belts. They push aside any competition using their warp augmented railguns to fire thousands of cubic meters of gravel and rock at your ship. This is the 2005 update of the original 1995 product with extra SSDs and several rules changes.