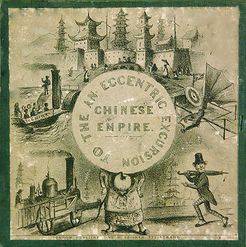 The game is a race from England to China via Europe, North Africa, and India between four players travelling by steamboat, the railway, a flying machine, or on foot. Players are randomly assigned to one of four possible methods/tracks to get to China: Steamboat, Walker, Aerial Machine and Railway. Those tracks cross each other permanently on their way to China. Players do not remain always on the same track but move according to the throw of a four sided tee-totum. As in many Victorian games, there's also a system of fines/rewards. The first player to reach the end of the track wins the pool.