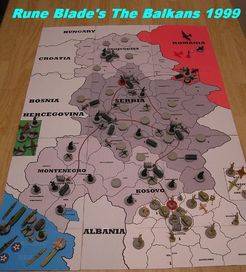 From the website: "NATO air strikes have failed to stop the mass killings in Kosovo or force the Milosovic government to sue for peace. NATO and US forces feel that the only way to stop the "ethnic cleansing" in Kosovo is to launch a ground campaign against Serbian forces to not only liberate Kosovo, but to bring about regime change in the Milosovic government. Meanwhile in the east, Russia refuses to sit idle while an old ally is attacked by outsiders and begins to bring "volunteer forces" into the area. Who will win this showdown in the Balkans?" For this, you'll be provided with the game's mapsheets, rules, charts, etc., while you will utilize the components from Axis &amp; Allies or related games.