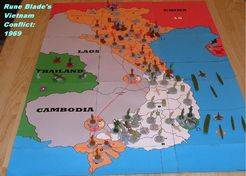 From the website: "The US was engaged in the Vietnam Conflict from the late 1950’s until the mid 1970’s costing the lives of over 60,000 Americans and over 3,000,000 North Vietnamese, thus being the first American defeat in war. What if the American military had decided to launch an invasion of North Vietnam to force them to sue for peace? Could things have turned out differently or would things have been made even worse?" For this, you'll be provided with the game's mapsheets, rules, charts, etc., while you will utilize the components from Axis &amp; Allies or related games.