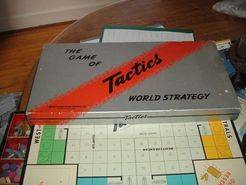 From the rules: "Not a war game but a game of world strategy. "TACTICS duplicates actual world conditions today. It places the player in the position of the head of some neutral or belligerent country and lets him use his own judgment as to how present international problems should be met and overcome. "TACTICS may be played by two belligerents, or by two belligerents and one or both neutrals. "The object for belligerents is to blockade opponent belligerent's SEAPORT and for neutrals to trade for profit. Blockade is accomplished when a belligerent's SEAPORT is completely cut off from the sea. Trade is accomplished when a SUPPLY SHIP is moved into another player's port." Neutrals accumulate victory points through trade, but may be attacked by belligerents, which allows them to play a diplomatic protest card. If a third protest card is accepted (they can be dodged by paying a gold), then that neutral joins the war against the offending nation. Neutrals may try to provoke attacks in order to pile on and share the war loot with the victorious belligerent. War is a game of manoeuver: battleships kill transports easily, but killing a battleship requires getting two friendly battleships on opposite sides of the target. Each nation has two planes, but these only come into play through chance cards, as do submarines (each of which lurks in a particular square of the board and kills an enemy ship that moves onto the square).