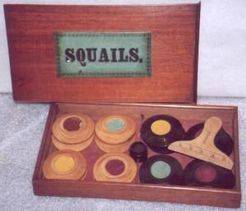 A game close to that of Crokinole and "Bowls" or other Bocce-related games. The object is to get your colored or otherwise marked Squails (round flat disks, usually 4 in number) as close to or touching the Procese/Jack (smaller diameter, but thicker and heavier flat disk) by setting your Squail on the edge of a table and striking it with the palm of your hand. There is a version from House of Marbles in thier "Around the World with Eight Great Games" series, which details some terms to be used in the playing of Squails, such as "To Flute"-To strike a Squail or the Procese off the table and "Excrunch"-To hit an enemy Squail very hard.