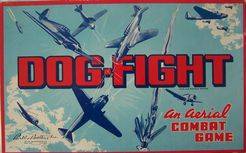 From the rules: "Dog Fight very closely approaches an actual combat between fighting planes, bombers and anti-aircraft guns. The play takes place on a vertical board which allows the important consideration of altitude to become a part of the play. The planes against the sunset sky make a most realistic picture. "By making use of the allowable moves of the planes and of the spinner which controls 'Hits' it is the purpose of each contestant to silence the anti-aircraft fire of his opponents and to disable and put out of play his opponent's aircraft. Players accomplish this by obtaining proper position with their planes and diving on or shooting down opponents and bombing anti-aircraft guns." The game board is a vertical piece of cardboard in which the wings of miniature aircraft are inserted to give a feel of the current layout of aircraft. (Note that this is different from the 1963 game of the same name.)