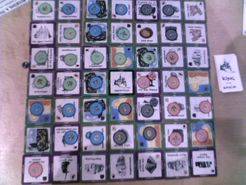 King of the Realm is a board game for 2 to 6 players. The board (called the Realm) comprises a number of Counties (tiles), which are divided into four different types (Cities, Farmlands, Landmarks, and Mines). Each player is dealt a hand of cards; these cards allow the players to take control of the different Counties in the Realm by placing Units of four different types (Armies, Bishops, Merchants, and Nobles) keyed to whatever problem the County is afflicted with (Anarchy, Bandits, Heretics, and Poverty). At the end of the game, players form Duchies out of the territory they've conquered to score points. Bonuses are earned by forming Duchies that have one of each Unit, one of each land type, or both. In addition, proximity to the center of the board is rewarded by an additional bonus. The player who forms the most valuable Duchies earns the most points and therefore wins!