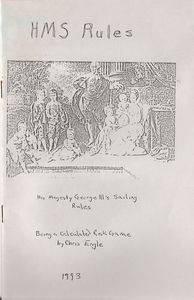 HMS Rules is a naval combat miniatures game (using the Matrix system) set in the Napoleonic/American Revolutionary era. Players control either the British, French, Spanish or American fleets. Players must provide their own equipment (dice, map with squares, counters or miniature ships, etc.). The game consists of a single 16-page rulebook, including a few pages of tables. The game requires a referee to assess the difficulty of any proposed action. Success is stated in a number of "6s." An easy task may require only one 6 to be rolled, but a difficult one might require six 6s. Likewise, movement is 1" as a base, but can be more depending on the number of 6s rolled, how the ship handles in general, and ship's angle to the wind. Combat is also resolved comparing 6s rolled. Before the game, every ship has a record sheet and must be rated for Handling, Hull (ability to take damage), Crew Combat Quality, Crew Morale, and Crew Damage Control. As in most Matrix games, the player chooses how many dice (d6s) to roll at any given time, which can vary at his whim. For an easy task, a player may opt to roll only one die, or two dice, or a dozen. The catch is that while 6s succeed, every "1" that is rolled causes something bad to happen to the ship of the die roller! The more 1s you roll, the worse it gets.