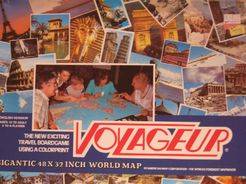 Voyageur is a global travel game that serves well as an educational game (though the geography is now 20 years out of date and counting) but is light enough to be playable even by those not in want of a geography tutorial. It is played on an 8-segment 32"x48" map of the world, which is mounted on a thick cardstock attached to half-inch-thick foam backing. Each player is randomly assigned one of twenty 'itineraries', listing the six cities of the world they must visit in any order before returning to New York - the first player to reach New York after touching all cities on his/her itinerary wins. Travel is handled by a roll of a die which determines which of five travel decks (Walk, Car, Train, Ship, Plane) the player must draw from and execute - most cards dictate a number of kilometers that the player may move (subject to terrain - ships travel by sea, trains/cars/walk by land). The player drives a pushpin into the map at his/her destination and wraps a like-coloured thread around it - so as the game progresses, a crisscrossing network of coloured pushpins and thread show the paths that each player has traveled.