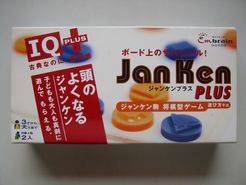 Components: 4 3X3 interlocking board pieces 24 Janken (Rock, Scissors, Paper) pieces in orange and blue 1 bag Janken Plus is a production of Gakken, an educational publishing company in Japan, in the Embrain Goods line. The games are touted as being good for the brain. There are at least four different games you can play with the Janken Plus set, though not all of them are Rock-Scissors-Paper games. 1. Janken Game: Because the four boards are interlocking, they can be arranged differently, as a 6X6 square (basic game using all 24 janken pieces), or other arrangements with games for 12 pieces. The pieces can be moved in any direction, any number of squares. Pieces are taken in the traditional Rock beats Scissors beats Paper beats Rock way. The game ends when one player has only two pieces left. On the box it says it's a similar game to Shogi. 2. Play-off Janken: Each player places their pieces face down; they can arrange the pieces as they like. The board isn’t used. They each choose one piece and play janken. The winner is the player who captures the most of their opponent’s pieces. (This is not a thinking game.) 3. Tic-Tac-Toe variant: Using one board, the players play a Tic-Tac-Toe game aiming to get three pieces in a row. Once a player has played three pieces, he or she can only move them on the board. A variant is to use two or more unconnected boards and more pieces, with the ability to move pieces from board to board. 4. Pinch-pon: Players use six pieces each on the 6X6 board. They capture their opponent’s pieces by sandwiching them between two of their own (as in the ancient game of Hnefatafl and similar games).