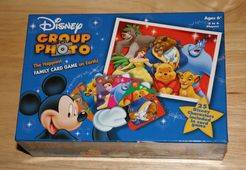 The objective of this game is to be the first player to match all of the characters on your character card with the playing cards in your hand. You draw either the top card of the draw pile or the top card of the discard pile and then discard a card. Each character card has 6 Disney characters on it. The deck of cards contains two normal and one "ID" version of each character. The "ID" version of the card contains biography information for each character and in order to win the game, two of the six cards in your hand must be "ID" cards. In addition, there are: "Red Eye" cards, which let you get any card out of the discard pile "Overexposed" cards, which force any player of your choice to get a new randomly chosen character card "Photo Shy" cards, which are a wild card substitute for a character card "Say Cheese" cards, which are a wild card substitute for a character card OR an "ID" card The characters in the game include: Ariel Baloo Bambi Belle Cinderella Genie Lady Mickey Mouse Mulan Peter Pan Pinocchio Pluto Scar Simba Sleeping Beauty Snow White The Beast Tigger Tramp Ursula Winnie the Pooh