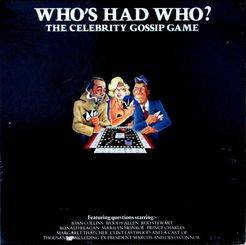 From the box: "Who's Had Who? The Celebrity Gossip Game "All the fun of after dinner seduction with none of the practical difficulty. "Who's Had Who? the ultimate in after dinner entertainment, at least seven times funnier than getting drunk and falling asleep in an awkward position. "A box full of hilarious gossip about the rich and famous together with the chance to play at seducing a host of celebrities from Ronald Reagan to Marilyn Monroe and Des O'Connor. "Who's Had Who? contains over 1000 hilarious gossip questions, but these are just one element of the game. As in real life luck, skill, technique, wit, the possession of the right attributes and even the ability to induce a headache in Joan Collins so as to protect her from Warren Beatty, all play their vital part. "Based on the best selling comedy book 'Who's Had Who' the game is devised by its authors and the inventor of the best-selling strategy game 'September'. "Raucous, flirtatious and always good for a giggle, Who's Had Who? invites you to play with the largest range of celebrities ever available in one box."