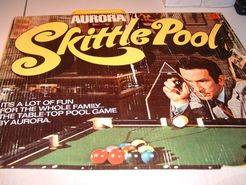 Skittle Pool is similar to “Skittle Bowl”, however the pins have been replaced by nine 2" billiard balls. The table is approx. 24 inches square with 3 pockets each on the left and right sides. At the bottom of the board is a pendulum device that acts as the striker. The cue ball is placed in a special pivot foot and that foot is rotated to aim the cue ball at a target ball. The striker, a ball similar in size to the cue, is lifted and released (or gently thrown) to strike against the pivot foot which in turn transfers the energy to the cue ball. Most billiard type games can be played on the table. A scoring rack (wire with plastic scoring chips) is included in the game. The game was most notable for its promotion by American actor Don Adams who was well known for his role as a bumbling secret agent in “Get Smart” on 1960’s television.