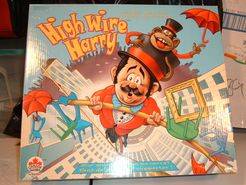 High Wire Harry is a children’s balancing game that can prove difficult for the shaky handed player. Each player is given a set of eight “props” – 2 chairs, 2 stools, 2 picture frames and two umbrellas. On his turn, a player rolls the die and places the corresponding prop either on Harry’s crossbar or on Harry’s coat hanger (which is “balancing on his forehead). Once the prop is placed, the player must roll Harry down his tightrope by using a lever located at one end of the board that tips the tightrope forward and backward. Press too quickly and Harry smashes into the building, probably losing his props. Press too slowly and you’ll fail to ring the bell that signifies a successful roll (and suffer the derision of the other players!). Any props that Harry drops become the active player’s and will have to be loaded on Harry again. Once you have loaded all your props, you have to take Harry for one last run, this time with his pet monkey riding on his hat!