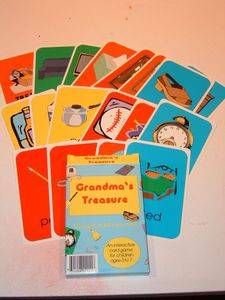 This is a deck of cards that can be used to facilitate a treasure hunt around your house. The game consists of a deck of 26 cards; 1 Treasure card and 25 cards with images of objects that you would typically find around your home: Blue cards: shoe, dresser, clock, bed; Orange cards: tissue, window, vacuum; Green cards: couch, tv, table, lamp, books, chair; Yellow cards: bottle, milk, pot, spoon, salt, refrigerator; Red cards: door, ball, pencil, key, phone, plant. The hunt organizer (Grandma?) selects one of the cards and holds it in reserve. She then places a second card at or near the object/location shown on the reserve card. Another card is placed at or near the object/location shown on the second card. The organizer proceeds in this fashion, placing as many cards as she chooses, and placing the Treasure Card last. The participant(s) are handed the reserve card and follow the trail of cards throughout the house to the Treasure card. The participant(s) them redeem the Treasure Card for a prize.