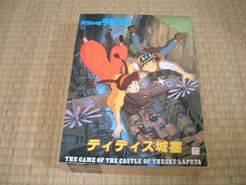 This is a Japanese game based on the anime "Castle in the Sky", formerly known as "Laputa: Castle in the Sky". The English-language subtitle is "The Game of the Castle in the Sky Laputa". The game in all the pictures here on BGG has the Japanese title 「ティディス城塞」, meaning "Fort Tidisu". (There is another official "Castle in the Sky" board game, titled 「天空の城ラピュタ」 like the film itself. Perhaps the entry you're reading was originally named after that game, not the one in the pictures here, but BGG will not allow the other game to be added to the database without details on its rules.) This game has three scenarios: 1. Dola's Surveillance Game (Dola gang vs. the Military): The Dola family of air pirates attempts to penetrate the military surveillance net around the airship transporting Muska and Sheeta. 2. Dola's Airship Attack Game (Dola gang vs. the Military): The Dola family attacks the airship itself, as in the opening scene of the film. 3. Pazu's Sheeta Recapture Game (Solo game): Pazu and the pirates try to break Sheeta out of Fort Tidisu, where Muska has imprisoned her. Player plays as Pazu and the pirate gang, and there's a deck of cards that randomly determines the Goliath's actions and the robot's actions.