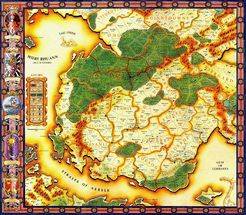 | Wizards of the Coast

The Legacy of Kings was a boardgame set in the AD&amp;D Birthright world. It was played at conventions in the late 1990s. In 2000 it was made available for download from the Wizards of the Coast website. The game covers the grand strategic conflict for the continent of Cerilia. One player is the game moderator and also controls the Awnsheglien. The other players act as regents of the various realms.