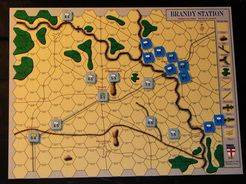 Just after Chancellorsville, the biggest cavalry engagement occurred on June 9, 1863. Reorganized Union forces under Pleasanton engaged JEB Stuart's Confederate Cavalry. This game was recently published in the new Panzerschreck issue #14. This is a 9 turn game on a small map with 10 units per side. Should play quickly. The game has initiative, disruption, counterattacks, event chits (which modify a rule or condition). Victory is determined by comparing (at the end of the game) the randomly drawn Victory Chit (by the Union player) with the status at the end of the game. The Confederate player does not know what goal the Union player has. The CRT is relatively bloodless, but you accumulate Disruption Markers which represent losses and reduced combat/maneuver abilities (sort of a step loss system).