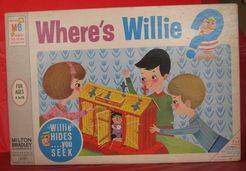 A plastic house with four doors stands between the two players. One player secretly places Willie, a little man in a swimsuit holding a flower, behind one of the doors. The other player has to guess behind which door Willie resides by opening the door. If Willie is there, a little bell goes ‘ding!’ and the player scores a point. There is no penalty for a wrong guess. Players alternate roles until someone scores four points to become winner. Where’s Willie? was an activity on the television show Shenanigans.