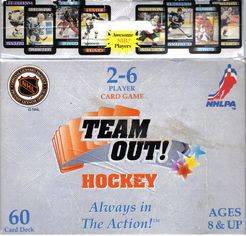 In this hockey themed card game, each player attempts to build a starting line-up of NHL players (1 Goalie, 1 Center, 2 Wings and 2 Defensemen) while hindering their opponents attempts to do the same. The game is played over a series of hands building up points until one player reaches at least 400 points and is declared the winner (or Team Out! Champ). The game comes in a small box with a set of rules and a 60 card deck. The cards consist of 30 NHL Player cards, 3 Power Play cards (which is a wild card allowing a player to substitute one for a starting player), 18 Action cards (which hinder opponents), and 9 Protection cards (which protect players against Action cards).